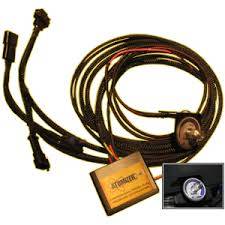 The ATS Atomizer controls engine fuel rail pressures in order to maintain an optimal volume of fuel to the injectors. By doing this, the fuel droplets are introduced into the cylinders at the smallest size possible and create an efficient burn when mixed with air and combusted. Until the ATS Atomizer, pressure boxes have had a reputation for being hard on fuel systems; causing leaks, cracked injector bodies, blown seals, and poor driveability. The initial idea was great, but the execution was poor. However, that is no longer the case. The Atomizer communicates with factory equipment to drive fuel pressure up, based on engine load instead of just a fixed graph. The advantage is that it not only saves the fuel system from constant excessive pressure, but it will also retain factory-like driveablity, with substantially better top end power, lower EGTs due to proper fuel atomization, and better fuel mileage.


See the the dyno and pressure graphs under Additional Information on the right side of the screen!