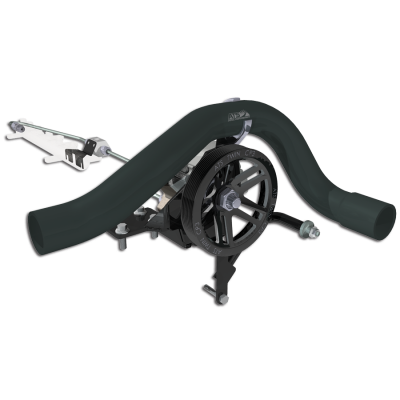 ATS Twin Fueler System for the 2003-2004 Cummins doubles the fueling capability when running large tunes and bigger injectors. The system is not only designed to work in conjunction with the factory CP3, but it also maximizes the system. Utilizing ported rail fitting, larger diameter high pressure fuel lines, and a true twin system, the ATS kit allows for huge amounts of power and reliability. When it comes to optimizing a Common Rail Injection System, rail pressure gets talked about a lot. Pressure is in fact extremely important, however, it is not the only important aspect. Equally, fuel volume is the actual additional amount of fuel you are able to add in to the cylinders during injection. This is going to to have massive impact on your final ability to create power. Ultimately, your truck needs fuel pressure to properly atomize the added fuel volume that you introduce. Not all modified CP3 kits or dual CP3 kits have this capability like the ATS Twin Fueler System does. Additionally, the billet aluminum wheel, is sized proportionally to the factory CP3, allowing better equalization of the rails. Generally, this will not matter so much as the regulators will control the amount of fuel regardless, however, it is attention to detail such as this that sets the ATS kit apart from the others. The Twin Fueler System Features and Benefits: